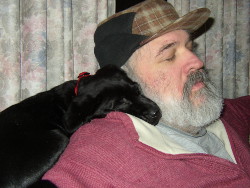 After the first week with us, we did away with the puppy food she was weaned on and what is left in the bag will probably end up as squirrel food. Instead, I make her food from ground turkey, chicken, chicken fat, carrots, peas, spinach, and brown rice. Her puppy treats are beef liver simmered in vegetable oil and cut into small chunks, or mild cheese, also cut into small chunks.

As time goes on, I'll be substituting things like sweet potato for the rice, a little at a time to get her used to it. If anyone wants my puppy food recipe, feel free to contact me.

Her first week here she gained about 2 pounds and weighed in at just over 11 pounds on the eighth, but she was still skinny. I didn't get to weigh her last week, time just got away from me. But this morning I was amazed to see that she had gained six pounds in just two weeks. She is no longer skinny, but has that slightly chubby look you want to see in a puppy.

Her fur is silky, shiny and smooth with just the right feel to it, and her eyes are bright, wise, and have a gleam of mischief. The new food is clearly working out well and after the first few days, she has returned to having a normal stool three or four times a day. 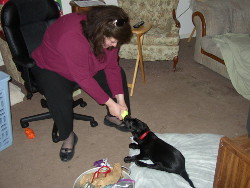 Velvet is a happy, playful pup, but she tends to be a little nippy at times. Well, sometimes she is a lot nippy, but she is learning. The traditional method of substituting a toy for fingers no longer works well. She wants to puppy play and that means biting.

Unacceptable. Puppies and adult dogs cannot learn that it is okay to bite people.

We have taken to imitating a puppy yelp when she bites. This is working very well to curb her appetite for fingers, arms, hands, toes, and clothing. The punctures on my hands and fingers are healing and hopefully, we've "nipped" this little problem in the bud if we continue with our teaching.

As with all retrievers, she loves to chase a ball or any other toy. We're teaching her fetch at the same time we play with her. It's all fun for now of course, she's still a bit young for serious, formal training. We squeeze the toy to make it squeak a few times, then roll-throw it and she chases after. Sometimes she stalks the toy, which is so cute and funny at the same time.

She likes to play tug of war, but we avoid that since it encourages puppy nipping and it also is not the best teaching for a dog whose instinct is to retrieve game. We want her to have a soft mouth. 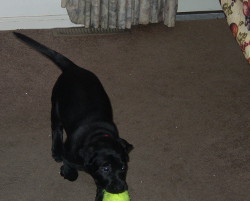 Velvet is also learning the rules of being a good puppy. She knows now that outside is the place for puppies to do their business, but her small bladder and short intestinal tract can make it difficult for her to make it outside. It is all a timing thing. She has to get our attention, show us it's time to go out, wait for us to get a coat on, hook her up, take her outside and finally she gets to go.

Last night we made it to the bottom of the stairs and that was all the further we got. We still went outside, but it was too late.

She knows that "Sit" with a finger pointed at her means to sit her little puppy butt down and does it right about 90 percent of the time. This has already proven useful. If I see her go off on a mission to "find the spot," I can tell her to sit and it interrupts the mission, giving me time to pick her up, put on a coat and get her outside. Knowing "Sit" at eight weeks is excellent.

"Come" is just starting to sink in. I'm having her sit, walking a few steps away and then calling her. "Velvet. Come." When she comes, she sits again and gets a treat.

"No!" is another word that is beginning to sink in. We avoid using it too much, but when it is necessary, we issue it with a firm voice. Sometimes a gentle swat to get her moving away from the object of her attention is necessary. Like last night when she stood up on her hind legs to steal a piece of tinfoil from the garbage. Amazing she could get her snoot in there by stretching all the way out. 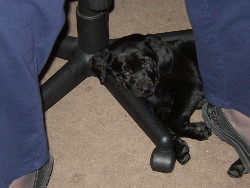 She knows who the soft touch is. She can go to Marg, put on the puppy eyes and get a treat. She barks when she wants something and can really communicate her frustration when she's not getting her way.
Had you asked me three weeks ago if an eight-week-old puppy could figure out how to open a door, I'd have said no. But...

I had reservations about getting her a crate. It takes up a lot of space, but it has become her home inside her home. Yesterday when she was worn out from playing, she hauled herself over, dragged the door open with her teeth, went inside and flopped on the pillow. She held the little slide lock handle that you use to lock the crate door to pull it open. 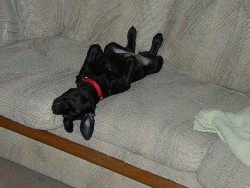 There are not too many moments that are not cute, but this one was precious and I didn't capture it.

I didn't think to take the picture because I was tired and going to bed. In the morning the only thing I could think was "why didn't I grab the camera for that?"

After we went outside to prevent any late-night accidents, I took a few treats from the fridge and put Velvet in the crate. She sat and I gave her the treats one at a time, then closed the door. She went to the back, picked up her little green dog toy and curled up with all four arms wrapped around it and the head under her chin.
It was one of those had to take a picture moments and I didn't even think of it. It was two-thirty in the morning and all I wanted was my bed.

Running with the Big Dogs 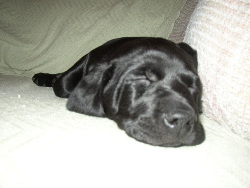 Across the street is Hazel. Hazel is a 7-year-old Saint Bernard that is small as Saint Bernards go. She probably weighs in at about 100 pounds when she's eating good, but can go on a hunger strike at times. She is very perceptive of her human family and the other dogs, and when something goes wrong, she stops eating.
Velvet met Hazel when she was with us just a few days. At first, when she saw Hazel from a distance, she ran out to the end of the leash. Hazel (with permission from her owner) came across the street to meet the new neighbor.

Velvet suddenly realized how big Hazel was and hid between my legs. Cautiously, she crept out and they had a good sniff. Velvet with tail between her legs and quivering, Hazel curious and gentle as always. Then Hazel was off and running, hoping Velvet would play, but not having much success at enticing the little puppy into running at a full gallop with her.

Outside her own family, Hazel is the first dog that Velvet has met. Now she still wants to see Hazel and always tries to get me to cross the street to see if Hazel is out. I'm not sure she's ready to play much yet, but Hazel is. At the rate Velvet is growing, it won't be long and they'll be fast friends.

All content on the this site is the property of its creators. Reuse without express written consent is forbidden. Copyright 2013