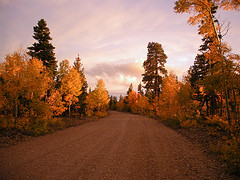 It was 1986 and the fall colors were at their peak or maybe a few days past peak in early October. The day was clear, dazzlingly brilliant and you could not ask for a more beautiful day in Northern Wisconsin. It was a Saturday morning and still fairly early when I asked my best friend Dan what he wanted to do.

It sounded like a plan to me. We ate half a pound of bacon and half a dozen eggs cooked in bacon grease (heart disease was not something we thought much about) and left my family's cabin. I knew exactly where we were going to explore and it was surely an all day hike. We each had a compass, a lighter, a pocket knife and a shotgun.

Grouse season was open and they are tastier than chicken. Back in those days, neither of us would ever admit we didn't expect to shoot any grouse. It was part of the joy of being friends and doing things together. We didn't need an excuse to go hiking all day, but the guise of hunting provided one.

We drove only a half mile and parked the car. I'm still not sure why we drove that half mile, perhaps so the return hike was a half mile shorter?

Down a road that was once a logging road, past 'Tommy's Shack,'―an old lumberjacks cabin (I'll tell you about Tommy in another post) and then the road really was a logging road. We continued past other familiar landmarks―'The Triangle,' 'Shay's Camp' and 'The Pit.' We went past 'The Draw' and up the hill into the hardwoods where the road made a loop. It was there the adventure would begin and we had already walked about two miles. 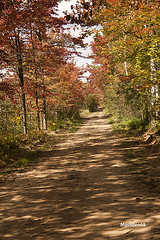 At the far end of the loop, we left the old logging road to go east a short distance and came to another logging road. As far as looks go, there was no way to distinguish one road from the other and for that reason, I took three tree branches and leaned them against each other to form a tepee―a marker to indicate the crossing point from one road to the other.

We turned north and began our exploration. Every turn in the trail revealed a new vista of brilliant red, yellow and orange leafed stands of maple, basswood, aspen, ash and ironwood. We walked a long, long way that day and as we walked, we chatted and talked and solved half the world's problems. I remember a coming to a fork in the logging road amidst a stand of birch trees and checking the sun (yes I can tell time that way) and noting it was time to turn back.

And so we walked, keeping half an eye open for the tepee and somehow missing it. I've always wondered if it fell over or we just walked and talked right by it. In a large stand of hemlock trees that were probably two centuries old, I realized we we had not passed that point before. The stand of trees was very large, and we hadn't been there. Somehow, we had missed the crossover point. Another check of the sun told me we had an hour of daylight left, and getting back to the crossover would use most of that if my estimation was correct.

I posed the question to my buddy. Turn around and go north to look for the crossover, or head west through the woods to find our way out? There wasn't much discussion. Backtracking admitted defeat. We went west through the woods. And half an hour later, our passage was blocked by flooded water and beaver sign was everywhere. Gnawed trees, felled trees and a lot of standing water. We turned east and made our way back to the road.

The sun was going down and it was twilight. We went further south and tried west again. More water. I grumbled as we stumbled our way back to the road. And I do mean stumbled. It was getting hard to find our way through the trees. On the logging road again, I checked my compass and the road did indeed go north and south as it should have. We continued south again, went past two small lakes, and before long came to an old cabin.

I had never been in that exact place before, but I was fairly sure I knew where we were. The cabin was long abandoned and the sun was gone, but the fork that split the road into east and west paths and the two small lakes we had passed told me, by way of historical knowledge passed down by old lumberjacks and my own father, approximately where we were. My own sense of direction and general knowledge of the area also told me we were fairly close to our cabin, if we could find a way to get to it. 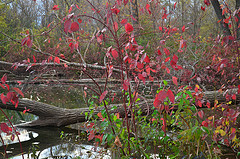 Before going further, we unloaded the unused shotguns. Stumbling about in the dark is not a good idea with loaded guns. We went west again, this time along the logging road. We only went about 1/4-mile and came to the largest beaver dam I had ever seen. It seemed large in twilight that was really not light anymore. The rising moon helped, but not enough. We turned back. The east side of the fork―if I knew where I was―led to a small town just another three-mile walk down the road, but at least it was a way out of the nightmare we seemed caught in.

We didn't get far and came to another beaver dam that made the first one look small. The dam was huge. More than ten feet tall along its entire length and we could not see the end in the dark. Dan tried to climb up on it and I stopped him. Beaver dams are treacherous to walk on in the light, and it was dark by then, with only the moonlight to see by.

We made our way back to the cabin.

"Now what?" Dan asked yet again.

We were down to two choices at this point. The abandoned cabin and whatever was inside, or a fire and the damp ground. The cabin was infinitely more appealing. The front door was barricaded from the inside, but a rear window was wide open. We went in, found our way by the light of a cigarette lighters and managed to find a few things inside. 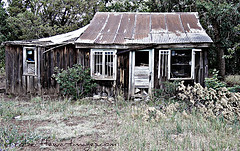 It was sort of fun, looking about that old cabin in the dark with hardly any light at all. The floor creaked. There were spiderwebs and old cans and all kinds of junk everywhere. It was almost like exploring an ancient ruin in an adventure game.

There were old newspapers and in a drawer, a single receipt that confirmed by way of the name written on it, that we were where I thought we were. A drawer in the cabinet near a long empty kitchen sink with a hand pump held three candles. We had light. Of interest was an old brass bed with the mattress sitting on the floor inside the frame. The place was loaded with mice.

In the dark, we laid on that old mattress, listening to the mice but could not fall asleep, though we had walked more than twenty miles that day. It suddenly occurred to me, it was only about seven in the evening. Despite a long day of walking, sleep would be a long time coming.

We did what we always did to pass the time. We talked until it was late, slept and rose with the sun to try to find a way out.

"Just don't tell any of our friends we got lost," Dan told me. "We'll never live it down."

"We are not lost," I told him. "I know exactly where we are and besides, it is all the beaver's fault. Its just a matter of finding a route west to the main road."

In the light, crossing the first beaver dam did not seem so dangerous and we made it without even getting our feet wet. We walked a short distance once we were over the dam and a grouse flew up, nearly from our feet. It was a rare, easy shot at a grouse and we both shouldered our shotguns and pulled the triggers at the same time. 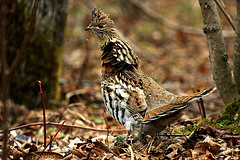 Neither one of us had loaded our gun. The grouse would not be breakfast and we both laughed about it. Another half mile of walking we came to the main road and walked nearly a half mile to the car.

The irony of that last half-mile was that had we left the car at the cabin originally, we would have walked about 300 yards to the cabin door.

Footnote: This adventure ranks high in my list of favorite outdoor memories. This is a memory I recall when I long for the smell of autumn leaves, the crisp, blue sky and the solitude of the forest and the trees. This place is my escape from the real world into a real life memory.

Photo of Logging Road in Fall by M. Golden at Flickr.com

Photo of Beaver Pond by Richard Hurd at Flickr.com

Photo of Old Shack by Robert Tewart at Flickr.com

Photo of Ruffed Grouse by Tim Seabamirum at Flickr.com