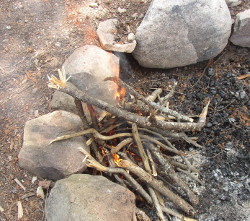 A campfire or bonfire is one way to extend your enjoyment of the outdoors. Who could argue against sitting around a campfire while loons call on the lake? Maybe you like to gather in a circle to tell stories with friends beneath a deep blue canopy scattered with billions of twinkling diamonds. Even just roasting a few marshmallows is a lot of fun. Don't worry, we won't tell a soul that you love s'mores as much as the kids do.

Fire requires three basic ingredients: fuel, oxygen, and heat. In the outdoors, we usually supply fuel in the form of wood from trees, but there are other sources. Dried dung is used for cooking fuel in some parts of the world. I know that might sound gross, but if there is no wood, it works and it doesn't smell quite as bad as you might imagine.

Proper organization will help make the project a success and counts a lot more than a perfect, neatly arranged pile of materials.

Make certain building a campfire is safe to do. During periods of drought or when conditions are very dry, fire danger soars and even a tiny spark can set off a wildfire. Check with local authorities about building a fire and alway observe fire bans.

A fire needs a safe place to burn where it won't spread. Make a circle at least five times the diameter of your planned fire and remove all the small bits of flammable material from it including sticks, twigs, bark, leaves, dried grass, and anything else that might burn. For a fire two feet in diameter, you want a ten-foot-diameter circle. Enclose the fire with rocks, bricks, or green logs to help keep it contained.

Danger: Using gasoline or highly flammable liquids is extremely dangerous and can result in an out of control fire, loss of property, severe burns, or even death. Don't do it.

When you're done with the fire, put it out cold. That means to douse the fire with water until every piece is cold to the touch. If water is scarce, cover the fire with sand or dirt. Keep a bucket of water and a shovel nearby to put the fire out in case it spreads.

If you'll be present, you can separate the fuel pieces and they will slowly go out.

Tinder burns very easily with a hot flame, but won't last very long. Its purpose is to supply enough heat to start the kindling burning. A good strategy is combines different kinds of tinder. Bark from a birch tree is excellent and will light easily, even if wet. The tiny twigs on dead lower branches found on a fir tree make a good second layer of tinder, or if you don't have any bark, can be the first layer.

Provide kindling in different sizes beginning with sticks barely bigger than twigs and progressing up to sticks one to two inches in diameter. Larger sticks from two to three inches in diameter are a good fuel source for the beginning of a fire. If you're building a cooking fire, anything larger will take too long to burn into coals.

Dry wood is best for getting a fire started, and the best dry wood has been dead at least a year. If a stick snaps in half easily, it is well seasoned. A stick that won't snap in half is still green.

When you lay a fire, your goal is to provide enough tinder, kindling, and fuel to keep the fire burning hot for ten minutes. During this time you can add larger pieces of fuel or continue adding small pieces of fuel. It depends on your ultimate purpose for the fire. 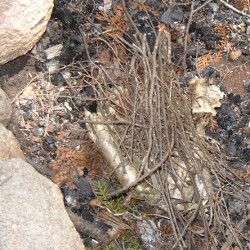 A large piece of birch bark about 3 x 6 inches makes a good platform for tinder. Peel small strips of outer bark away from the inner bark and place a handful of the small curls on top of the larger piece. On top of that put a good sized handful of dried twigs and press it all together. Lay the platform on the ground inside your fire circle.

A good base of tinder, no matter what it is made of, is the cornerstone of any fire. Although we are using birch bark in our example here, it is not the only tinder available.

At the ends of branches on some fir trees such as balsam, spruce and cedar, are tiny twigs. When dry and put into a bundle, they make an excellent tinder all by themselves.

Small shavings or splinters of dry cedar, pine, aspen, balsam, and other light woods also make good tinder, but you'll need a decent flame to light them on fire. 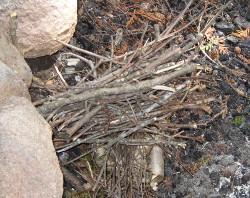 Kindling is small, thin pieces of any light wood that burns easily. Small dry sticks were used for kindling in this demonstration, but there are many other options.

The most important characteristic of kindling is that small pieces of wood are used. The stronger or tougher the wood, the smaller the pieces must be. Oak and maple will serve, but the pieces must be very thin--less than 1 inch thick. Cedar makes an excellent kindling when split into 1 to 3 inch strips, along with pine or any other light wood. 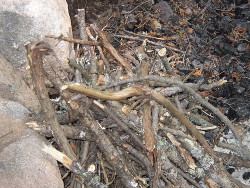 A third layer of kindling sticks leans against the growing pile in a circle. Leave a small opening that faces the wind so you can light the tinder.

Lean the first layer of small fuel sticks against the pile of tinder and kindling in a circle around the stack. Have more fuel sticks ready to place on top of the first layer after the fire is lit and burning. Your purpose here is to have enough of the fire built to get it going, but it is not so large that you can't blow on the beginnings of a fire if necessary to add oxygen to help it start. 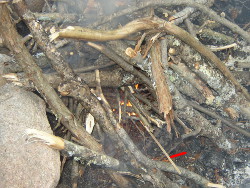 Butane cigarette lighters--okay they work, but they are not the best and are hard to get under the assembled fire to the tinder base. The longer butane lighters for lighting candles and BBQ grills are better, but they are still "no match" for a wooden stick match. Neither one works well in cold temperatures or at high altitudes. Learn to use matches and you'll master the art of fire building.

In this example, a long wooden match for lighting fireplaces was used for demonstration purposes was used, but the wooden "Strike Anywhere" kitchen matches work best.

Note the opening in the assembly for reaching the tinder base and the long match used to light the fire.

Strike a wooden stick match and light a curl of birch bark in the tinder base with it. It will start and the other pieces of bark will quickly ignite. As the fire begins, block the opening you left in the pile with your body to keep the wind out until the tinder begins to light. The tinder will start to crackle and pop as it starts, and you'll see the flames growing fast.

Give the kindling and first fuel sticks time to start burning. Start adding fuel to the fire in small increments. This will help you control the fire and keep it from becoming larger than planned. Adding a lot of fuel all at once can result in a fire suddenly grows very large when all the fuel catches fire and begins burning. You can always add more, and experience will teach how much fuel to add.

Add fuel to the outside appropriate to the size fire desired. If you want a cooking fire, add some seasoned sticks up to two inches in diameter. Larger pieces will last longer. Increase the size of your fuel gradually. As smaller pieces catch fire, add bigger sticks in one to two inch increments. Don't try to place an eight-inch-thick log on top of a few two-inch-diameter sticks. Rather, start with two-inch sticks, then three-inch, five-inch and finally that big eight-inch-thick piece.

Fact: A huge bonfire is impressive and fun, but you'll sit at the edge of the heat and have a cold back. Make small campfire and you'll sit close and be warm and cozy.