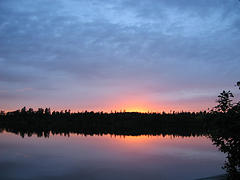 It started in Milwaukee at the annual Sports Show. The Sports Show is an outdoor extravaganza of shows, displays by various manufacturers promoting everything from fishing rods to the latest electronic gizmo guaranteed to triple your outdoor fun and of course, outfitters for trips around the world.

Outfitters for hunting, fishing and camping. If you want to go there, you can find someone to take you. Do you like to fish? How about fishing for walleyes in Canada? Or you could go bass fishing, ocean fishing, river fishing, pond fishing, reservoir fishing, lake fishing, freshwater, saltwater.

You can fly there, drive there, boat there or even walk there. Do you need a guide to help you find fish. No problem. Maybe you'd like to spend a week on a lake loaded with walleyes and not see another person for the entire time you're there.

If you like fishing, you can find a fishing adventure at the Milwaukee Sport Show and that is exactly what my brother Chris and I decided to do in 1986. I met Chris, Mom and Dad at the show just after it opening that year. Chris and I had already decided our main purpose was finding a fishing trip to Canada and never mind what mom and dad thought of that idea, they were coming along.

The show is huge. The main show is in the arena and the surrounding hallways, lobbies and then, in other attached buildings. There are so many attractions it's very hard to see them all in a single day, but we usually tried. I could have wrestled a bear one year, but my dad wouldn't let me. I was seventeen and had to settle for a picture of me feeding him a marshmallow. In retrospect, Dad was probably right not to let me. Even though I was in excellent shape, I had no experience wrestling bears...

Back to 1986 however, and Chris and I were scouting the outfitters for Ontario fly-in fishing trips. Oh we had a great time and it was even funny a few times. I walked up to a booth and the owner took one looked at me and said, "Sorry, no bass fishing." I was a little confused, why would he think I wanted bass fishing?

The guy had nice trips, but not what we were looking for. Eventually though, we found a very nice gentleman who had cabins scattered all over Ontario. A pilot would drop you off and you were alone for the entire time. Chris and I talked to him a while and left to talk to each other. Then we went back and made sure he had openings for the dates we wanted. After that, it was time to work on Mom and Dad.

Mom was easy to convince. We showed her information and she was excited. Dad had to talk to the guy, so we went back and talked. And talked. And then he talked some more. An hour later, Dad was leaning in favor of a trip he hadn't even thought about an hour earlier. I could not afford to go by myself and I wanted to go so bad. So did Chris. I think my mom wanted it bad too. Dad wanted to think about it and I was certain someone else would put a deposit on the time slot before he decided.

Before the show ended, we convinced Dad to put the deposit down and we were going the third week in June. The lake was called Otatakan and promised a week of non-stop fishing fun.

Half the fun is in the planning and I think we planned every minute of the week four times over. It seemed like June would never arrive, but it finally did. I drove up to our family cabin in northern Wisconsin and met Mom, Dad and Chris. From there, it was a long drive to Sioux Lookout, Ontario.

which highlights the flight and the fun that began within minutes of arriving.

Photo of Lake in Ontario by Jezz at Flickr.com