It was either late October or early November of 1978 when I came so close to losing a very good friend in terrifying incident, that I would have nightmares about it for the next ten years. In the end, it was a very close call that taught me, and him, a lesson about the outdoors. Mother Nature is an unforgiving mistress and if you want to enjoy what she has to offer, you had better play by her rules.

My family owns a cabin in northern Wisconsin on a nice lake. The fishing isn't bad and you can go water skiing or boating in the summer, snowmobiling, cross country or downhill skiing in the winter. You can also hunt ducks if you are so inclined, and that was what my friend and I had in mind. It was the last year of high school for us and we both knew that after graduation,

we probably would not see each other a whole lot. We were making the most of the time we had left together.

By November, the local ducks have long since left northern Wisconsin for sunnier, warmer parts south. Pushed along by weather, lack of food and the instinct to migrate, ducks, geese and other waterfowl begin to migrate as early as late August. The few ducks left behind are hardy species such as green-winged teal, scaup and mergansers. Mergansers are fish ducks. They eat a lot of fish and fortunately for themselves, they taste like rotten fish, so they don't feel much hunting pressure.

My friend and I loaded our scatter-guns into the boat and headed out after lunch on a Saturday to look for ducks. I knew there wasn't much chance of finding any, but we just loved being in the outdoors and going hunting was one way to do that. The day was overcast and low clouds sometimes spat drizzle or rain. The air was heavy with humidity and the decay of fallen leaves―a smell I have always loved and still do to this day.

The plan was to make our way up through the chain of lakes, as far upstream as it is possible to go and slowly work our way back to the cabin as we explored various places that sometimes held ducks. We would talk about school, girls and what we were planning to do the following year. It was idyllic for us. This was what we loved to do. We went hunting or fishing and sometimes we were so busy chewing the fat, we'd forget we were supposed to be hunting or fishing.

So we rode upstream through three lakes and into the river, then worked our way back. We were nearly finished with the outing when my friend saw a duck. A single, lone blue-bill (scaup) flying across the lake. He pointed it out and I slowed the boat as we watched. The duck flew behind a bog and disappeared from view. 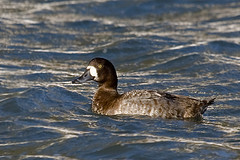 I surveyed the situation and decided we would use the motor up to a certain point, then row. It would be a difficult job, but it seemed worthwhile since as of yet, there were no ducks in the freezer. In high school, I didn't get a lot of productive duck hunting time because I played football. Weekdays there was school followed by football practice. Saturday were game days and I played while my friend kept statistics for the small-town newspaper his family owned.

We got to within about 500 yards of the bog and using the motor was no longer possible, so I pulled it up and began rowing. He kept watch and after a while, spotted the duck swimming in the water behind the bog. After rowing for 400 yards, and getting to within about 300 yards of the duck, the duck got nervous and flew across the water to the other end of the patch of water behind the bog.

So we turned the boat around, rowed out and made our way to the other side of the bog and started rowing again. This time we got closer before the duck took off again and landed right in the middle of the patch of water and close to the bog.

Now, the water close to the bog on either side was very shallow and the bottom was very mucky. The boat scraped along the bottom and it was hard going, even for someone who was in as good a shape as I was.

Nevertheless, we were determined not to go home empty handed, but it was clear a new strategy was needed. We backed out and talked for a minute. The land behind the bog was private property, but the lake and lake bottom are public property, so we were well within rights to be on the lake, but not on the shore without permission.

My friend had what seemed like a great idea. "Let's sneak up on him. We'll just walk across the island. After we get him, we can use the boat to pick him up."

It seemed like a great idea. The island he was referring to was the bog. It really was an island. There was trees growing on it, bushes and all sorts of vegetation. I agreed with the plan without thinking.

We beached the boat on the lake side of the bog and started out. We had a good 300 to 400 yard walk ahead of us and we went single file, him in front of me. He carried the shotgun across his chest, one hand on the stock, the other on the fore-stock to be ready when the duck took off. 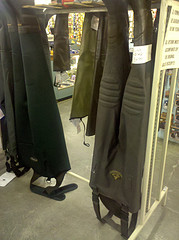 We were about 100 yards from the boat when my friend took a step and disappeared. Gone.

He was only five feet in front of me and it was a good thing we were separated by that much space, or you might not be reading this. He was actually not completely gone, but for two seconds I thought he was. In fact, his head was still visible. Just barely and by tilting his head back, he could still breath through his mouth and nose. He had stepped through a hole in the bog.

What saved my friend was the way he was holding his shotgun. The shotgun was held sideways across his chest and it caught the edges of the hole and kept him from disappearing completely. We were both wearing waders (rubber boots and pants that come up to your chest) and his quickly filled with icy water that added considerably to his weight.

We both panicked of course. I immediately tried to pull him out, but I could not budge him. I was in tip-top shape, but every time I tried to pull, my feet would sink into the bog and the whole thing would move like waves on the surface of the water.

One of my first thoughts was to go for help, but he begged me not to leave him like that. It was a serious problem, he was in serious trouble and I was in quite a bit of danger myself.

Of course, it was only then that my dad's words came back to haunt me. "Never try to walk on a bog. You'll fall through and they'll never find you."

It started to rain again, the temperature was dropping and it was late afternoon. The sun would set soon and it was already looking darker. I tried again to pull him out, but the bog would sink and he felt like he weighed 600 pounds. I could lift that much, if I had a solid footing and didn't have to go much higher than my knees. I didn't have solid footing.

I finally had an idea. I told him what I was going to do and he tried to stop me, but I ignored his pleas not to leave him and went back to the boat for the oars. I laid them on the ground parallel, knelt on them and reached down into the water to get under his arms. Then I heaved.

At first, the bog sank and his head went under water. Then he lifted up a little and I pulled harder. I swear, he did weigh almost 600 pounds at that point, but I was lifting with adrenalin then and I'm sure they heard me for miles as I dragged, hauled and pulled him up onto the bog.

Finally, I had him half out of the hole. I backed up a little and pulled more. Once I got his waist out, the water spilled from his waders and he lost weight quick. Without the muck holding onto him, he came out easily. We didn't speak. We grabbed the oars and back-tracked back to the boat and got the hell out of there.

And so my friends, if you're ever tempted to walk on a floating bog, don't. There's no duck or anything else worth the risk.

Photo of A Floating Bog by Amie Fedora Photography at Flickr.com

Photo of Greater Scaup by Mike Baird at Flickr.com

Photo of Waders by Steve Rocco at Flickr.com