Crappies in the Canoe 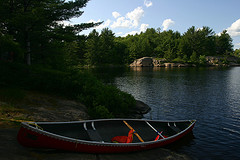 Early spring, 1994. We were up north at the family cabin in Iron County Wisconsin and it was early May. Probably the first weekend of the month. My lovely bride Margaret and myself met my parents at the family cabin for a weekend of fishing, campfires and relaxation. We decided to visit a pair of lakes that are about a half-mile walk though the woods. It wasn't that far and the lake rarely had visitors.

At that time, someone had left a boat back there and if you could find it, you could use it. Who was going to complain really? The lake was on state land and if you left a boat there, it was free for anyone to use. Eventually, the Department of Natural Resources found the boat and removed it.

So we carried a canoe, fishing equipment and supplies over to the lake. The plan was for Mom and Dad to fish from the canoe, and Marg and I would fish from the boat. Marg could not swim, was deathly afraid of drowning and viewed canoes as virtual death traps. She always wears a life vest in a boat which is not a bad practice, especially if you can't swim. Or go canoing with my parents...

I wanted to take Marg on a canoe trip someday and had been trying to convince her that canoes were not unsafe, and that you could spend days in them without tipping over. A day spent watching my parents safely paddle a canoe around a small lake would help me convince her the small boats are safe. Whatever was I thinking...

We found a shallow bay down on the south-east corner of the lake and the crappies were hitting good on the small minnows we were using for bait. Fishing a lake that seldom receives any fishing pressure is truly a pleasure, and that lake was no exception. It didn't take long and we had a fair number of slabs in our bucket, and had started counting them to make sure we didn't go over the limit. We were looking forward to tasty meal of fried crappies. 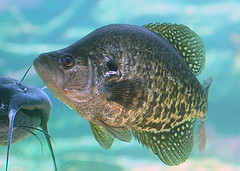 Mom and Dad were in the canoe and also catching plenty of crappies, and like us, they were putting them in a five gallon bucket that sat in the middle of the canoe.

The day was gorgeous, but cool. Mostly clear blue skies and just a few of those little white puffy clouds that look exactly right and drift slowly across the sky. Sitting there on the water, the clear sky and blue water with the smell and sounds of spring in the air, you might have thought you had stepped right into one of those old Hamm's Beer commercials. You could look around and half expect to see ole 'Sascha,' the Hamm's bear, step out from the trees and sit down next to a case of the golden brew.

A breeze came up and it was causing our boat and the canoe to drift a little and occasionally the boat and canoe would bump together. We were fishing close together, just a few feet between us and catching one crappie after another from the space between the two crafts. The water was about three feet deep and it was rather unusual to find crappies in water that shallow. However, the water in that spot was probably warmer than any other on the lake and so it wasn't very surprising to find the fish there.

We each had a small anchor to help us stay in one place, but the boat and canoe still tried to spin around the anchor rope in the breeze. Since we had to haul all the equipment a half mile through the woods, we had only brought two small anchors along.

I don't remember why, but Mom decided the anchor they were using should be on the other side of the canoe. After she mentioned it a few times, Dad reached over and hauled it up, lifted it over the canoe and dropped it into the water on the other side. In most cases, this would not be a problem, but now the rope was tied to the canoe on the wrong side. 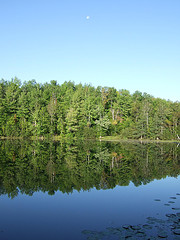 The anchor dropped, reached the end of the rope before it hit bottom, and the canoe flipped over. Mom, Dad and some of the tackle were flipped right into the water in the process. The flotation in the canoe forced it to continue it's roll and it righted itself, although now it was full of water.

Mom and Dad were soaked in the freezing water and Dad had to reach down to retrieve the fishing rods, a net and a few other things. Fortunately, Mom's very expensive Nikon camera was dunked, but it remained in the canoe. It cost a pretty penny to have it dried out and repaired.

Unbelievably, the crappies they caught were no longer in the bucket, but swimming freely in the canoe. Like true fishermen, we scooped them up in a net and put them back in the bucket. Except for being wet, Mom and Dad were no worse for the dunking.

The whole incident was hysterically funny, but I wasn't laughing. I saw the look on Marg's face and knew there would never be a canoe trip with her. To this day, almost twenty years later, I only need mention the word 'canoe' and that look of firm resolution crosses her face.

"You're not getting me into one of those things. Don't even think about it."

It was fortunate we were in shallow water and the only real loss was having the camera repaired. That and Margaret's eyewitness proof that canoes were indeed dangerous deathtraps just waiting to drown unsuspecting city girls. In spite of the dunking, we had a good time that day. We got the canoe emptied of water (and fish) and went on fishing for a while. It is just one more adventure to remember and smile about.