I think it was the winter of 1967. I'm not sure of the exact year and it was a very long time ago, but 1967 seems right and it fits. We lived in a small town in Central Wisconsin and looking back, it seems like an almost utopian existence. Almost, for fear and danger and death may await the unsuspecting six-year old boy who wanders beyond his given borders against parental instruction.

Yep. 1967 in small-town America. I walked to kindergarten and back, nearly a mile each way and did it every day. I passed neighbors and friends and people I didn't know, who seemed to know me. Mom had half the town watching out for me and if I was three minutes late, the phone wires were probably burning. In the winter of 1967 I was a grand six-years old and proud to be in kindergarten. I was almost devastated to find out that I wouldn't learn to read until the next year, but that was how it was in 1967, kids didn't learn to read until the first grade.

The boys that lived in the house near ours, whose yard coincidentally joined with ours behind the garage, were not the best of influences on me. I do remember there were at least three of them, perhaps even four or five. I just don't remember and it doesn't matter anymore, although I can remember their last name. They were all older and I wanted to be a part of their fun. They talked about ice skating on a pond and of course, I wanted to go.

Being a good boy (most of the time) I asked my mother and being a good mother, she told me no. I wanted to go and was unhappy about it. She told me how ice could be thin and I could end up falling into icy water. I'd drown. All of a mother's worst nightmares. I learned later, not all of those nightmares were fantasies. My mother grew up in small-town America in Wisconsin too, but those are stories for a different time, and a different place. 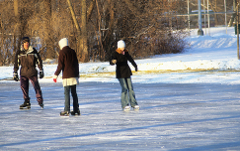 I followed those boys to the pond and knew I should not be following them at all. There were going to the pond and I wanted to see it. I told myself I wouldn't walk on the ice. And technically, I was not disobeying if I wasn't ice skating, was I? So I followed and they didn't pay me much attention until they arrived at the pond. There were five sets of railroad tracks to be crossed and I looked both ways, then went ahead. It seemed wholly sensible to me.

There were cattails and reeds and other things growing up from the ice. It wasn't what I expected and I began to believe the nightmares my mother had woven for me. Up until then, I had seen her worries for exactly what they were. Worries. Now I half believed what she had told me.

I stopped on the shore and watched as they put their skates on, all but one of them. He didn't have skates for some reason. But he played on the ice anyway. He'd run and slide and chase his brothers around. But after a while, I got tired of sitting on the shore and I was going to go home.

"Hey why don't you come on out here," one of them told me.

I shook my head and said I wasn't going on the ice. I told them it might be dangerous, that the ice could be thin and if it broke, I might drown.

They laughed and told me I was a scaredy cat. I didn't want to go on the ice and no amount of name calling or belittling or anything else would get me to go. At least, not until one of the older boys came over. He brushed a little snow away from the ice and it was clear as crystal glass.

I looked and he was right, it was thick. I stepped onto the ice and walked a little. It 'seemed' solid. But now I was disobeying my mother and although I know I caused her more than a few gray hairs, I never did that on purpose. As much as I wanted to play on that ice, I decided it was time to go home. Home was just a few blocks away and when the boys weren't looking or paying attention, I scrambled up the embankment onto the railroad grade. 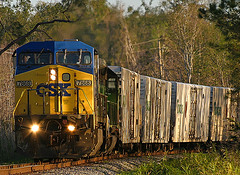 The diesel horn was so loud I almost wet my pants. I never heard anything so loud in all my life and the train was coming fast. I had never seen a train so up close and personal before, and this one was coming right at me. I stood on one side of the five sets of tracks and the train was on the track closest to me. The horn sounded again and I was rooted in place. Heart pounding, deer in the headlights, bug about to be splattered on a windshield rooted and unable to move or even think.

I heard a squeal that I now recognize as the brakes, but I had no idea about it then and the train just seemed to loom in front of me. The horn sounded again and the engine was so big, so huge and now I could see the engineer sitting up there, waving frantically at me with one hand. And that is what pushed my overloaded, fear-fogged brain into doing something, anything but keeping me from peeing my pants.

I fled, directly across the track, directly in front of the engine, running for my life as fast as those little six-year-old legs would carry me. Safely across, or so it seemed, I wheeled about to stare at the behemoth that nearly bought my life. The engine passed me and the engineer glared at me through the side window. The ground shook and the horn blasted again.

My heart was pounding so fast it hurt. I'll never forget that, how my heart felt in those moments. Something, I'm not sure what, got me moving again. I still had two tracks to cross and I looked both ways (never mind I was standing in the middle of yet another track) and there were no more trains coming. I finished crossing the grade and watched the train until the caboose finally went by and there was a man on the back who shook his finger at me.

That finger reminded me of my mother, and all the neighbors and friends and people I didn't know who watched for me every day on my way home from school. If I was up to mischief, those people wagged their fingers at me and called my mother. That finger got me running again. I ran for home and spent the rest of the day indoors, down in the basement and doing what, I'll never remember because all I could think of was that train engine and that horn. 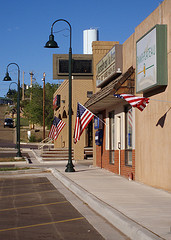 Even in small-town America in 1967 there were dangers that lurked. Dangers that a small boy might never think of, or even intrude on the nightmares of a mother who never wanted more than to see her kids grow up without a hurt or a care.

Years later, I would have reason to ride big-city commuter trains on a daily basis for more than seven years. Big trains, pulled by big blue diesel locomotives that reminded me of the big yellow locomotive that nearly scared my heart into stopping.

On the platforms, they have a yellow stripe painted. If you stand behind the stripe, you're safe. On it or over it, you're in danger. One day, at one particular station, I stood with my toes touching the yellow line. A train was coming, an express and it would be moving very fast at something like fifty or sixty miles per hour. I stood there, heart pounding and remembered that moment so many years ago. The horn blasted and it sounded the same as the one from that winter in 1967.

Just before the engine arrived, I looked up and saw the engineer. He wasn't waving frantically at me, or even concerned. The engine went by at a distance of about three feet, so close I could reach out and touch it if I leaned forward a bit. The blast of air that buffeted me was no less unnerving than the blast of the horn just before the engine arrived. I nearly rocked on my feet and I'm not what you'd call a small guy. Then the engine was past and the big push of air reversed and I could feel it's pull. My heart was pounding, but not like the time in 1967.

Have you ever thought of being an adventurer?

Life is an adventure, whether you find it in small-town America in 1967, the big city in 1998, or a remote lake in the Canadian wilderness in 1986. The moments we live out will alter the remainder of our lives, whether through perspective or direction.

Live each moment as if it was your last on earth. Look back on heart-pounding moments with fondness because you're still alive to remember them. The moments when the adrenaline peaks and the shaky, sugar-deprived moments that come after them, those are moments you never want to forget. Those are the moments when you truly feel alive.