Feeling the Need for Speed 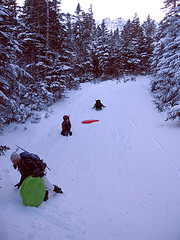 It was a long walk, complicated by the icy road and we kept slipping, sometimes sliding back five or ten feet. But we were persistent and eventually we reached our goal―the top of the hill.

"Are we going?" my youngest brother Chris asked. Probably because I had expressed doubts as to the sanity of the venture.

Honestly, I had reservations. But we had come with six or seven of my friends, including my girlfriend, and I really didn't want it to look like I was chickening out, and especially not in front of my little brother. I looked down the hill, maybe a mile, maybe even a little more. I could see them down there, standing around the van and some of them looking up the hill at us.

And she was looking. In her bright blue jacket, white mittens and auburn hair fluttering in the breeze. I could almost see her greenish-blue eyes.

It was February of 1980, the year after I graduated high school and I had not yet gone off to college. Somehow, my youngest brother tagged along that day, and that was okay with everyone. Everyone liked him, even my girlfriend.

We were there because a warm spell had settled into northeastern Wisconsin and we'd had a heck of an ice storm the day before. Everything was coated with an inch or more of ice from the rain that fell as the temperature plunged from about 35 down to 25 degrees. And it kept raining even though it was that cold.

The end result was a world coated in ice. A crystal palace of a world that shone in the February sunshine and almost blinded you. The main highway was cleared by salt put down by road crews, but the township road the van was parked on hadn't been touched and the long hill was coated with ice. The van had spun out just one quarter of the way up that hill, and my friend had to back it down. 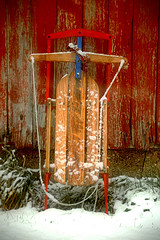 And there I stood with Chris, looking down a long, icy hill that from the bottom looked perfect for a ride on a sled, and from the top looked like a crazy idea gone bad. Oh yeah. Speed was the name of the game and we'd come there for that specific purpose, to sled on an icy hill that people said you could hit 40 miles an hour on.

Except, no one had ever done it when the road was glazed in an inch of crystal blue ice.

I turned the sled around and it wanted to run off by itself. I got it pointed straight down the hill and laid down on it, face forward and took note of the fact that my face was about six inches from the icy surface of the road. I could see the little pebbles in the asphalt through the ice. Interesting.

The sled started to slip and Chris grabbed me. I was having second thoughts again, but my friends at the bottom of the hill were cheering us on. Or jeering us on. I've never been exactly clear which it was, but it was what it was, as they say today.

I felt Chris' hands on my shoulders, then he laid on top of me. There was no friction between the steel runners of the sled and the ice they rested on. We began to move immediately and picked up speed fast. I tried steering a little and found I had minimal control. Better than none anyway.

Faster we went and the cold air stung my eyes and my face. My eyes began to tear and it became hard to see where we were going, but I had a death grip on the steering handles and wasn't letting go. I could feel Chris' hands dig into my shoulders.

The fence posts on the side of the road began to whip past at an incredible rate, until they were almost a blur. The ditches that separated the road from the fences were suddenly valleys of death and my original plan of steering into one if something went wrong was well, ditched. Pardon the pun, but that was the word we used in those days. Ditched.

Halfway down the hill, a bump crossed the road. It was only a couple of inches high. Climbing the hill it seemed like nothing. When I saw it coming up through my tearing eyes, I was sure it spelled disaster. We hit the bump and suddenly there was air beneath the sled. A lot of air. I heard someone at the bottom of the hill shout an unrepeatable two-word phrase, and then we crashed into the ice again.

Just past the bump, the hill steepened quite a bit. At that speed, it seemed almost straight down and that was where we landed at the end of our brief, unplanned flight, right on the steep part.

The momentary flight of the flying eagle didn't last more than a second, but seemed to contribute an extra 30 feet per second to our velocity, which had not yet become terminal velocity. Oh no. Not yet.

The toes of my boots bounced on the ice behind us, and I lifted them back up as the sled rocked violently. Any control I thought I had at the top of the hill was probably no longer an option. The only thing I was accomplishing at that point was keeping it on the road. 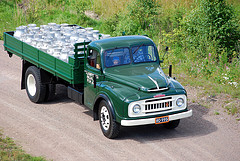 And then I saw something really scary.

Ahead just about two miles was the highway. From that highway, a milk truck turned onto the road we were presently using for our rocket test flight. Even though the sound of the wind in my ears and the runners on the ice was loud, the roar of that motor was even louder. The only way that truck would make it up the hill, was if it was traveling fast enough, and the driver was pushing the engine hard.

There was another bump at the bottom of the hill. This time however, the road dipped slightly just before the bump, so our direction changed upward and we hit it so hard I nearly lost my grip on the handles.

Again, the air separated us from the ice and now the van was so close. It seemed to jump up in front of us and the people around it scattered as we came crashing back down onto the ice. I saw sparks fly from the runners and that seemed ridiculous to me, since ice and steel don't make sparks. Later I would discover that the runners cut through more than an inch of ice to make contact with the pavement.

The truck driver blew his horn when I steered right to avoid the van, then left to avoid the ditch. We careened from one side of the road to the other and I was fighting to keep us out of the left-hand ditch and away from the approaching milk truck. I heard the horn again, but all I could see was frozen grass on the shoulder beneath the ice and the fence posts on my left whipping by.

The truck went past with another blast of the horn and we were finally slowing down. We traveled another quarter mile before it seemed safe to steer into the ditch and I moved us over. As soon as we hit the plowed snowbank, we lifted up, tilted almost sideways and then we were over it and into the deep snow. The sled plowed to a stop and for a couple of seconds, I just laid there, face full of snow and ice chips and...

"WooooHoooo!" My brother was shouting at the top of his lungs. 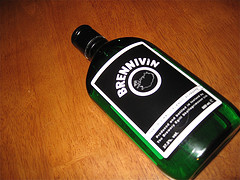 I stood up on shaky legs, felt my arms and hands shaking, and pulled the sled out of the snow. Chris was almost dancing and I had to chuckle at him. He was exuberant with joy and adrenalin and the rush of danger and speed. I felt it too, I just react a bit differently.

We had a bottle of schnapps with us and I had a long pull on it.

"I get to go next," my girlfriend told me. "You have to take me next."