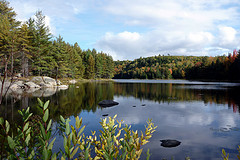 I was about six-years old. Dad wanted to go fishing in Canada and it would be my second trip there, although I was just a babe in arms for the first time around. Dad loaded the family into the car, packed it full of clothes, fishing gear, a tent and an old outboard motor.

He had reserved us a week at a resort on some lake with a name I can't remember. What I do remember is that it was kidney shaped, there were several rivers that fed the lake, and one river that emptied it. It would be a week I'd never forget and for a six-year-old boy, it left a pretty amazing impression on me.

This weeks adventure is dedicated to my Dad, and very appropriately, on Father's Day.

I don't remember the first part of the trip much. We traveled in the car and at some point we entered Canada. I don't remember that. Then we went down a long gravel road and somewhere on that road, there was first one, then a second loud bang. We had blown not one, but two tires within moments of each other. And of course, we only had one spare. Let the adventure begin. 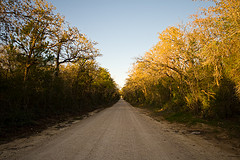 Dad ran/walked about five miles back down the road to where we passed some men cutting trees down. He had to run because it was late in the day and he was worried they would head for home before he got there. If he missed them, it was a long, long way to town. We stayed in the car with Mom, and she would not let us out much. I'm guessing she was worried we'd get lost, or run into a bear, or the boogie man from the deep forest would steal one of us.

The lumberjacks brought him back to the car and they took the two tires off, and then they left with Dad for town. He was gone a long time, and in all that time, not one single car passed us. Not one. Mom still would not let us out of the car, except to water the local fauna on occasion. It was dusk when Dad returned with the men and they helped him put the tires on, and then they left. We pushed onward.

The cabin we stayed in was small and rustic. Pine boards paneled the walls. I think there was one bedroom. Us boys slept on cots or the couch. Mom spent a lot of time swatting mosquitoes on the walls before bed. Every night. There were three of us boys then. Me, the oldest. Tom my younger brother and Joel, who was then my youngest brother. Chris would not be born for another year or so. 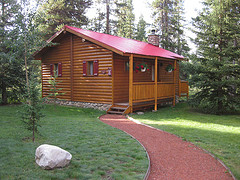 The next morning, Dad put the outboard motor on the boat that came with the cabin and all five of us piled in. I remember the striped life jacket Joel wore, the same one I had worn, and that my brother Tom had worn, and later, the one my brother Chris would wear until he outgrew it. It's funny the things that make an impression on you, and I can see that life jacket as plain as day.

Dad trolled as we motored slowly up a river that seemed strewn with sticks, logs and other things. It seemed kind of scary to me and Mom didn't have to tell me twice to sit still or stay in the middle of my seat. I remember he caught a Northern Pike; a skinny, snaky thing that he let go.

Later that evening, he took Tom and I fishing. We stopped by a weed bed, weeds that to this day I call pencil weeds for the way they look, standing straight up out of the water and no leaves, just a straight stem. I had a rod with a Johnson Silver Minnow attached to the line, and I was sort of showing off to Tom how well I could cast (not that well), when a fish leaped right out of the water and grabbed lure when I cast it out.

I was amazed at first and didn't realize the fish had grabbed my lure. Then I was fighting the fish as best I could. I'd caught fish before, but nothing like this monster. It seemed huge the way it came straight up, standing on it's tail for a moment, then crashing down with the lure in it's mouth. It swam one way, then another way and at times it seemed I could barely hang onto the rod, but I was making progress and then it was gone. Just, snap and it was gone. I was so upset, I reeled the line right into the reel.

Dad blamed himself because there hadn't been a steel leader on the line and the northern pike, which was about 24 to 30 inches long, bit the line with its sharp teeth and that was that. We would stop at that weed bed every day for the remainder of the week so I could try to catch that fish, but of course, that was a moot exercise.

I never blamed you Dad. I was mad I lost the fish, but not at you. 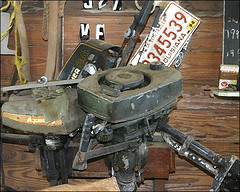 It was getting dark after I lost the fish, and the mosquitoes were thicker than needles in a tamarack swamp. Dad started the motor and we started off, but then the motor caught fire. Old outboard motors had the gas tank right on the motor, and Dad was scooping water from the lake to cool the valve enough to let him shut the gas off. Somehow, he managed to shut the gas off and put the fire out.

Although he tried very hard, he could not start the motor and it was dead. He had to row all the way back to the cabin, a mile or two I'm sure, with mosquitoes swarming around us and we were crying and he couldn't even swat at them, he had to row. The next day, he rented a motor so we could go in the boat again. He and Mom took turns taking us out fishing, and the guys at the resort told us where to fish, so we had a steady diet of walleyes all week long.

I was always impressed by how he stayed by the motor, flames shooting up right in front of him, and working to get it shut off and put the fire out.

Sometime in midweek, Dad took Tom and I to the river that emptied the lake, but we walked there. An old, unused railroad bridge crossed the river and there was a huge rapids that was more like a waterfall. We walked across the bridge, then down alongside the rapids. The roar of the water was incredible.

We caught northern pike in the pool below the rapids on minnows and jigs. It was a lot of fun and Dad would hook a fish and then let one of us reel it in. We kept fishing until we ran out of minnows, then began the climb back up the side of the rapids.

I slipped and slid toward the rushing water and my legs went in, and I thought I was going to die. Then I felt Dad's hand close around my arm and drag me out. I was so scared, and it was over in a heartbeat. Probably, I was never in any serious danger, but to my young mind it seemed like it. I paid a lot closer attention to what I was doing after that and the following winter, I would remember the cold water on my legs when I ventured near the pond some boys were ice skating on. A pond I was not supposed to be at. Technically.

Thanks for grabbing me that day, Dad. I always wondered how you managed that with hands full of rods, tackle and a minnow bucket. I always figured you saved my life that day.

The last day at the lake, Dad took me fishing; just he and I and we entered one of the rivers that emptied into the lake. We went quite a ways up and came to a waterfall. The waterfall was tall, but not all that big. It was pretty and we fished in the pool beneath the waterfall, but didn't catch any fish. The spot was idyllic and often when I think of waterfalls and lakes and such, I remember that spot and how pretty it was with the white water lilies and the water falling.

What a great adventure for six-year-old kid. Thank you Dad, this father's day and every day. You gave me a love of the outdoors and a respect for the land I've never let go.

Thank you and Happy Father's Day,