City Girl in the Woods: Part 2 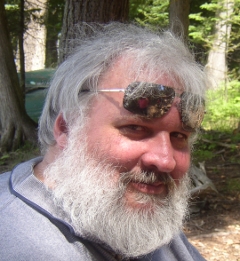 So there I was, this guy who was born and raised in The Woods and Small-Town America, on my own and making my way in The Big City. I was just about fed up with that and began making plans to move back to Wisconsin. But apparently, there were other plans for me. Somehow, I got roped into joining the company bowling team and for a short time, put my moving plans on hold.

I had started packing my small, garden apartment into boxes in anticipation of the end of the bowling league and had quite a few stacked up in my closets. But moving was not my destiny. One night in January we were short one bowler on our team and asked the desk if there were any substitutes. Just before we started bowling, there was our substitute―The Big City Girl who very quickly stole my heart.

It didn't take me long to start regaling her with stories of my deep woods adventures. I'd chuckle when she bundled up against the cold and I was still walking around in a flannel shirt. The longer we were together, the more I knew she was the woman I wanted to spend my life with, but how would that mix with The Woods and Small-Town America? There was only one way to find out, and that was to take her home and show her those things. And so began a new set of adventures for both of us...

Hiking in The Woods 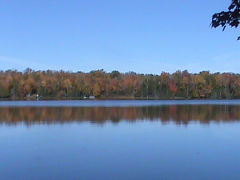 It was another beautiful fall day on The Lake. Mike suggested we take a walk through the woods so he could scope out a few new places for a deer stand. I thought it sounded like a great idea. It wasn’t the first time we had taken walks in the woods. We would walk through the woods to a small lake quite often. Sometimes we would even fish there.

He said I should wear the hiking boots he had bought for me instead of my sneakers, so I wore those instead. As we walked out the cabin door, he stopped and picked up his gun. I asked why he was bringing it, and he said he might shoot a pheasant or two if he saw any. I figured, okay, no big deal, I’ll just close my eyes if he shoots something.

We started out down the trail that lead to Twin Lakes, then we went off the beaten path into The Woods. After we left the trail, he cautioned me to watch where I stepped and pointed out all the hazards that are obvious to people like him so his City Girl wouldn’t twist an ankle or contaminate herself with poison ivy.

All went well and I enjoyed this new type of hike he took me on. There was a lot of different scenery and new things for him to teach me. After hiking for a while, I was getting tired and wanted to stop and rest, not to mention the fact that we had come to an area with tall bushes and weeds, and I was getting tired of pushing them out of my way. 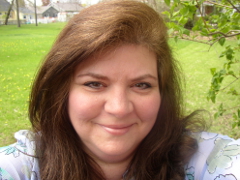 He pointed out a rock I could sit on while he went a little further around some trees to see what was there. Afterward, we would head back to the cabin. It sounded like a good idea to me and off he went. And there I was. By myself, alone in the woods. Or at least I thought I was alone. After he was out of sight and there was no one to talk to, I realized how loud The Woods actually is.

It was then I realized that I not only heard the wind rustle through the pine trees, but there were animals scampering around too. Lots of them. And those buggers were good at hiding because I couldn’t see them. I could only hear them. Oh! My! God! What if there’s snakes here!

Then I had a flashback of the fishing trip with my parents and the night we thought a bear was in the garbage and I realized it might be a bear in the woods rustling around and not the cute furry little creatures I first imagined. I started calling for Mike.

I thought to myself, "Are you crazy? What the hell possessed you to want to wait here by yourself in The Woods. Did you forget everything you learned about The Woods while you were growing up? You must be out of your mind!"

Very soon, Mike was back. I told him how we had to get out of there because I heard all the animals running about.

He laughed and said, "Yeah well, what did you expect? This is where they live ya know!"

City Girl lesson learned: Lots and lots of animals live in the woods. When in the woods, never let the man with the rifle leave your side. 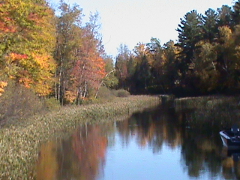 Sometime after we were married, on a hot steamy day, Mike suggested we try out The Canoe. I know I’m still a City Girl, but something told me that even an outdoors woman would say he was out of his mind. I told him no way, because they tip over too easy and we'd end up in the lake for sure. Furthermore, neither of us is the slim, trim athletic type and he's a big guy. I thought, sure I get in on one end, then he gets in on the other, and the canoe becomes a teeter totter as he flips me over his head into the lake.

"Sorry, but I’ve learned too many lessons to fall for that one. If you want to go canoing, then go with your brother."

He said, “It will be fun. We can even take the dogs with us.”

I thought he had completely lost his mind or thought I was still “citified” enough to put one over on me. “There is no way in hell you can get me and you in a canoe with two 100 pound dogs. Forget it.”

I said, “They can canoe all they want, I’m not getting in a canoe.”

We loaded the canoe into the back of the pickup truck. Mike asked me to ride in the box and hang on to the rope. So City Girl agreed. I should have known better. He drove down the long, weedy, bumpy trail to the lake. There I was, bopping up and down like a piece of popcorn in a hot pot and ducking to avoid getting slapped by tree branches. We finally arrived at the lake and unloaded the canoe.

It was a very calm day, the surface of the lake looked like glass and the fish were biting like crazy. Each of us had a pail full of crappie slabs. Mike pointed out his parents to show me how easy it is to paddle a canoe around. He said if we used a canoe we could go to all kinds of rivers and lakes we couldn't get to in a boat.

And then lo and behold, it happened.

His parents were floating in the lake right next to us when all of a sudden the canoe rocked to the right, then the left, then to the right again and they fell out of the canoe into the lake. All their equipment, camera and catch for the day dumped into the lake!

I yelled, “Oh my God are you guys okay?”

Mike yelled, “Oh my God, I can’ believe it! I can’t believe you fell in the lake! What are you guys doing to me?”

Luckily, they were close to the shore and in shallow water so they were able to recover all their equipment. They quickly turned the canoe back up upright and much to their amazement found their fish swimming around inside the canoe filled with water. They only lost a few. The sad part was his Mom’s expensive camera was ruined.

I’ll never forget Mom sitting on the shore, wringing her socks out and yelling at my Father-in-Law because he dropped the anchor and that’s what caused them to turn over. At the same time, City Girl is rubbing Mike’s nose in it.

“See, you see what happened! I knew it! There’s no way you’re getting me in a canoe!”

At the time of this incident, my parents had been canoing together for more than thirty years. In all that time, they had never once tipped the canoe over by accident. And in the nearly twenty years since, my City Girl has never once stepped into a canoe.

Read another version of this adventure here―Crappies in the Canoe

This City Girl has had many adventures since I met my husband and he has broadened my horizons in many ways. I have learned about about nature and hunting and fishing and all kinds of things. The list is too long to mention. We’ve had a lot of fun and made a lot of happy memories that will last a lifetime. I will always be a City Girl with broadened Horizons!