in the tiny tube and that thermometer will never work again.

At the family cabin, we soon learned not to buy mercury thermometers, because they would only make it into January and then we'd have to buy another one. We also learned that 38 below zero was not all that uncommon, at least in those days.

Forty-five below is pretty cold. The air stings plenty when you inhale through your nose and if you wear a scarf over your face, it will soon be covered in frost. Fifty below is downright numbing. If you happen to be on the roof shoveling snow so it doesn't cave in while you sleep, you can spit and it will freeze and crack with an audible snap before it hits the ground. The snow squeals when you walk on it.

Officially, the coldest temperature on record in that area was 55 below zero one winter. Around our lake and in other places, folks unofficially recorded a temperature of 63 below one night. We were there and I saw the thermometer myself. If you could spit, it would snap before it fell two feet. Sure. I went outside just to see what it was like.

In case you're wondering, it was cold.

These days they talk a lot about wind chills and the "Real Feel" temperature. Back in the 80s, we knew about wind chill, but didn't pay much attention to it. At fifty below, who cares. It is down right cold and adding a little wind... If you need to know the wind chill, you are not dressed properly. Period.

It was thirty four degrees below zero that Saturday morning. The sky was dark and overcast, and we had a quite a fire going to keep the cabin warm. Back in those days, we heated the cabin with wood. We've reverted to that recently with the high price of LP gas, and a fire just makes it all cozy inside.

By noon the temperature had warmed up to balmy 25 below. I was all for staying in the cabin, but my friends wanted adventure. We decided to take a walk in the thigh-deep snow down past Tommy's Shack to the creek bottom. Some will ask why and it was the hares that they wanted, and the creek bottom was the best place to get them. Snowshoe hares. Hard to see since they are white, and the snow is white. They like thick places like creek bottoms.

We took turns slogging―the practice of one guy leading the way and blazing a trail through the deep, powdery snow while the others followed. After half a mile we passed up Tommy's Shack, empty because Tommy had gone to the great beyond about six months before. I looked wistfully at the shack as we slogged by, and kept on going. I didn't want to go in, I had too many memories of the little shack and they all included Tommy. 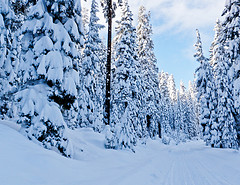 After another half mile, we reached The Creek. The creek freezes in the winter, but is never safe. The first thing I said when we arrived was that no one was to go onto the creek. In most places, the creek is only a foot or so deep, but there are pools that are much deeper and where the road used to cross the creek, it was quite deep and worse, there were big logs in the water that used to form a bridge and they were full of 12-inch-long, rusty spikes.

Dave asked me if the hares were pure white and I was explaining how they changed color in the spring and fall. Behind me, I heard Tim say something about going across the creek to hunt the bottom on the other side. Mark told him no, we were not crossing the creek, but Tim never listened to anyone. Apparently, that included me.

"Look. We can walk right across," he said.

I turned around and saw Tim standing on the ice about five feet from shore.

I didn't even get to object. Tim took another step and went right through the ice up to his waist. For a moment, I was only annoyed that he hadn't listened to me. For a moment. He struggled and more ice broke and he said he was stuck.

Mark put one foot on the ice while Dave held onto his arm and I held onto Dave. Mark, about 6'1" and stout, reached over and grabbed the flailing Tim by the coat and hauled him out. We got him on shore and he said he was cold. Then he said his pants were freezing.

That was the moment I realized Tim was in trouble.

I took Tim's gun and told the others to get him to the shack, and headed off through the snow. Even if the path was already slogged, you can't run in that kind of snow without snowshoes. Somehow, I ran most of that half mile, or I tried anyway.

At Tommy's, I grabbed an armful of cedar kindling, ripped up an old "True Detective" for tinder, and lit the fire. We needed heat quick, and it takes time to heat a building from -25 to something close to +75 or warmer. I loaded the old cast-iron barrel stove with kindling that had been chopped by a man who was now dead, and thanked him for it too. I used a lot of kindling because it burns very hot. It just doesn't burn very long, but it began to put heat in the shack right away.

When I went back outside, I could see three of them coming. Dave and Mark were holding Tim up with their arms under his and they were pretty much just dragging him. I took two pieces of split maple and went back in to see if I could get them in the stove and managed to do that. Shortly after that, the three of them arrived and they brought him inside.

Tim was gray. When I asked how he was feeling, he looked at me oddly and answered, but it was not intelligible. Hypothermia had already set in and it was bad.

I tell this story and people ask why we didn't take him to the hospital. Well, it was another thirty minute walk through deep snow and -25 degree cold, then a 30 minute ride to town, and another 30 minute ride to the hospital. Maybe we could have made it to our cabin, but that was another thirty minutes of Tim's temperature dropping even further than it already was.

At any rate, I made a decision that Tommy's Shack was the best chance for Tim. When they brought him inside, the temperature in there was probably up to about 10 degrees. Still sharp in the nose, but not stinging sharp like 25 below. His clothes were stripped off and he was wrapped up in three old, mouse-chewed wool blankets.

We kept feeding the stove and it did not take long and we were shedding our own coats. We got water from the spring and heated it up and let Tim sip it after he became more coherent. At one point, he went through a period where he would shiver on and off. Then it stopped and after that, he could talk better. That's when we started giving him the hot water. Later, he started shivering again, but it was less intense.

Near four that afternoon, Tim was warm enough and his clothes were dried out, so we made the hike back to the main road and went back to the cabin. The hares survived to hop another day, and my friend lived to make more hard-headed mistakes.

Only Tim's lower body was soaked and that probably saved his life. Physically, he was in decent shape and that certainly helped. His body protected his organs and brain by shutting off most circulation to his legs, thus preserving some body heat, but his internal core temperature still dropped severely.

We didn't have a thermometer, but by his symptoms it is a safe bet to say his core body temperature had fallen into the 85 to 90 degree range, which is moderate hypothermia. In this state, the victim is confused, shivers uncontrollably, his color is pale to gray, and he can only walk with difficulty.

I knew about hypothermia. If you grow up in the north woods, you'll learn about it and how to treat mild to moderate cases. Colder than about 82 degrees, the heart starts doing strange things and so does the person suffering the symptoms. They may inexplicably take their clothes off, try to hide in a small place, and other strange things.

It has occurred to me on various occasions over the years that Tommy saved my friend's life that day. He cut and split that kindling and stacked it outside his door along with a good supply of split and unsplit seasoned maple. If he hadn't done that, I don't know for sure that Tim would have made it back to our cabin. Tommy might have died that previous fall in 1982, but he left more than memories behind.