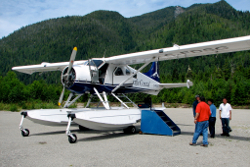 The drive from north central Wisconsin took most of the night and we arrived in Sioux Lookout, Ontario about ten in the morning. My dad had been to Sioux Lookout when he was about nineteen with some very close friends of his. We went to see the lake and the campsite where they spent a week, then it was on to the outfitter.

The outfitter had been very specific. Seventy-five pounds of gear per person including booze, beer, wine or whatever else you wanted to bring. The plane had to be loaded very carefully and could

not be overloaded. We hauled all our gear down to the dock and piled it up on the end. It wasn't long and plane arrived carrying the first load adventurers back from their vacation on a different remote lake. After filling up the gas tanks, the pilot began to load the plane with our gear.

I was standing there, watching and ready to help if needed. I wasn't needed. The plane was a Dehavilland Beaver. A single engine behemoth of a float plane that had room for at least four people and their gear and probably a lot more. In addition to our gear, there were boat motors, gas tanks and other stuff. The pilot heaved it all up into the plane without much of a thought to what went where. I made a comment something like, 'you must have to load the plane pretty carefully.' The pilot snorted, glanced at the outfitter who was also standing close by and said, "ain't as important as some think." I think it was then that I became just a little nervous.

I was heavier than anyone else and the pilot looked me over. "You sit up front," he told me. "I need to balance it out a little." I think that made me even more nervous. We all piled in, including my springer spaniel Autumn. The pilot climbed in and his fingers ran over over every button, every level and every gauge. If you remember those label guns that put raised letters on a plastic trip, there was a long label strip on the dashboard. "There are old pilots and there are bold pilots, there are no old, bolt pilots." For a short while, I felt less nervous. The pilot gunned the engine, we went down the lake and lifted off, one pontoon at a time.

We climbed up high and the flight was about fifty minutes north of Sioux Lookout, which is about ninety miles. Along the way, we watched out the windows and marveled at all the water. There is more water than land in that part of Ontario, or at least it seems like it. We were pretty high up and it was a fun trip, right up until we reached the lake.

My dog was in back with Mom, Dad and Chris and nervous, but I think she enjoyed the trip too. I'm not sure exactly, except I know she wasn't a problem. The pilot mainly didn't say anything unless one of us asked as question. I tried to talk to him a couple of times, but he wasn't interested in talking. Maybe he didn't have his morning coffee or something.

"There's the lake," the pilot finally pointed out. We all looked and it seemed huge, but exactly what we were expecting. It was kind of nice to get a look from the air. And then I got really, really good look.

I'm sure the pilot planned it. I'm sure he got a real kick out of scaring the crap out of city folks who came up there fishing. The plane tilted over to the right and fell into a dive at about a forty-five degree angle. The bottom of my stomach went straight to my throat and I heard my mother gulp over the roar of the engine. Oh yeah, he didn't throttle down, I'm sure he throttled up. Quite sure. I was pressed into the back of my seat the way you get shoved back when the driver of a fast car stomps the accelerator.

In seconds, the lake was coming up fast. I was sure we were gonna crash and had a death grip on the armrests. At what seemed like the last possible second, the pilot pulled out of the dive, leveled out and pulled the throttle back. We were about six feet off the water at about one hundred seventy miles per hour and then he finally throttled back and it sounded like the engine quit. I finally tore my eyes away from the lake and looked at him. I could plainly see the self-satisfied, sardonic half-smile on his thin lips.

The plane slowed and settled onto the water just as smooth as could be. There was no jolt, no bounce no anything. Once second we were in the air, the next one pontoon touched down, then the other. He throttled up again and drove over to the dock.

"Good flight," I told him. "Very smooth on the takeoff and landing. The dog didn't even get nervous."

The self-satisfied smile fell from his face, and it was time for me to smile just a little.

The people who were at the cabin were workers fixing things up. They gave us some directions where to find fish and after we hauled our gear up to the cabin, we were going fishing. We made arrangements for the pilot to bring a couple more cases of beer, more minnows and more ice for the beer in the middle of the week. Then he took off and we didn't see him until Wednesday.

about seeing a moose and the incredible fishing experience we had within an hour of arriving.