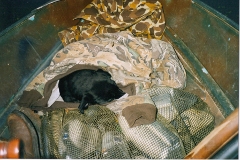 It was the first Friday after the first of November, 1996. That morning, I picked up a newspaper on my way to work and quickly turned to Pets in the classified section. I scanned down the list of ads. There were free kittens by the dozen. The usual mixed breeds of dogs. A rabbit or two. There! Black Lab Puppies for Sale. The phone number was someplace close. That day at work, the minutes were like days.

I didn't say a word to anyone—they might go buy MY puppy.

That night after dinner, I casually said to my wife, "So there's some black lab puppies in the paper, wanna go take a look?"

Now, she knew I wanted a dog, but I don't think she really knew what kind of dog I had in mind. I wanted a water dog.

A dog for hunting ducks. A dog that could jump into water that was 33 degrees and swim around just for the fun of it. We'd been married a few years and I kept saying, "As soon as we get a house, I'm getting a dog." Well, we got ourselves a house and I was getting myself a dog, come hell or frozen water. 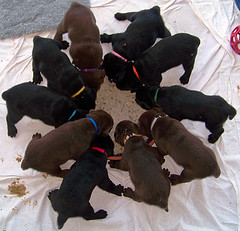 I could barely contain my excitement. I called the number and talked to the guy. He seemed to have most of the right answers, and a couple of the answers I could live with. He owned the mother, she was a family pet. She didn't hunt but the father did. No he didn't own the father, it belonged to a friend of his. No the mating was not an accident, it was planned. A good experience for his kids mostly. He said the mother was smart and the father was smart too.

Then he asked me some questions. Good questions. Questions that said he understood what he was doing. I wasn't prepared, but I was glad. I had a good feeling about getting a dog from him.

Then he dropped his big question. "Are you looking for a male or a female?"

"I want a male," I told him, and held my breath. Females are usually the first to go. But sometimes there are only one or two males in a litter and if two people happen to want them, then they are gone. The same is true of females of course, and it is much more common for all the females to go before the males.

"OK he said, come on over. I have two males left and no females. I've still got five puppies here, but the two females are spoken for."

We hung up and I grabbed my coat. It took my wife darn near forever to be ready to leave. I've always wondered what she was thinking at that point. 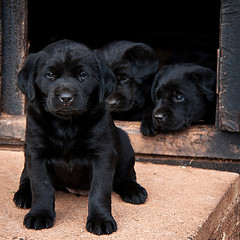 I took a duck call, a recently fired shotgun shell, and a glove I wore when I plucked and dressed ducks. We left and it really was just a short drive, about ten minutes away. I rang the bell and shortly the door opened. I was greeted by a pretty female black lab and the guy who was on crutches at the time. He showed us in, introduced us to his daughter and his dog and talked to us for a few minutes. Finally the moment I'd been waiting for all day. He showed us the puppies.

At first, he just showed us the two males. One was clearly the leader, the other followed. We watched them play in the garage. I picked the one up and examined it. Everything seemed fine, right down to the wide webbing between his toes. I looked at the other one too, but my mind was almost made up.

He brought the other puppies in when I asked him to. The pack ran around the garage, tails wagging and sniffing every corner eleven times and one more time for good measure. That pudgy black male was always at the head of the pack and where he went, the others followed. His tail, at just 10 weeks, was curled tightly over his back.

I blew on the duck call. Just a quick quack. He stopped in his tracks and the others bowled him over. He was up in an instant looking at me. My heart was going 90. I blew the call again and he came running over. For a moment, the others hesitated and then followed him. They only stayed a moment though. They had no interest in the duck call.

I repeated the test and this time I showed them the smelly glove. The big male was all over it and tried to take it from me. I laughed and kept hold of it. The others sniffed it and quickly ran off to explore the garage again. After a minute or so, I picked him up and petted him. He licked my face. I showed him the shotgun shell (It was just something to show him, to see if he was interested in new things and new smells, in case you were wondering.)

He was interested. He sniffed it, tail rigid over his back. Eyes wide open, curiosity quelling his urge to struggle out of my arms. There was one more thing I needed to cinch the deal. If this relationship was going to work, the puppy was going to have to win over my wife in a big way, because a puppy means accidents, mushy dog food, vet visits and licked faces. 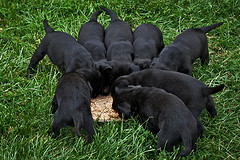 "Here," I said, "You hold him a minute." I put the puppy in her arms and watched. She looked looked dubious, but willing. The puppy licked her face.

"ICK!" she exclaimed but didn't put him down. "This is the one you want?" she asked me.

"Take him back so I can get the checkbook out."

I don't think my grin could have gotten any wider. Nope, that would been darn near close to disappearing like the Cheshire cat.

The owner asked me all the questions all over again. He extolled on the virtues of his dog, the puppies mother and showed me her, and the sires, pedigreed. He gave me about a five day supply of puppy food too. We finally managed to leave. I had the puppy under my arm and opened the truck door for my wife. She got in and I plopped the puppy in her lap.

"You want me to hold him?" she asked, not sounding real happy.

I didn't answer, I just got in the truck and drove straight to Petmart.

The puppy went straight to work making friends with her. He licked her face.

I bought a leash, a collar, a couple of chew toys, a ton of treats and a throwing dummy made for puppies. When I got back out to the car, the truck door was open and my wife was standing there, blocking the door with her body.

"Really?" I said, pretending to be astounded a puppy would do such a thing. I got some paper towels from the back and wiped it up. He rode on the floor the rest of the way home.

Inside the house, I put the newly acquired dog items on the table and set the puppy on the carpeted floor.

Suddenly, all was not well. Gone was the security of the pack, the familiar surroundings. The security of being held. His legs went shaky, the little tail drooped and he cowered. The poor thing let out this sad whimper and that I think, was the moment he won my wife.

I didn't pick him up. After a minute or two, he was sniffing around without moving. Then he was stretching out and sniffing all around him. Another minute and he did move, and suddenly, there was the bold, curious puppy again, checking out his new digs, although a bit cautiously.

I was going to name him Sam. I don't remember if it was that night or the next day when I told Marg that. "No," she told me, you can't name him Sam. Sam was the name of our brother-in-law and she was worried that Sam might be offended. I hadn't thought of that. Ironically, a number of years later they got a dog and what did they name him? Sammy, after Sam, who everyone calls Sammy.

Willy! That was it. Willy. Willy the Wonderful Water Dog! Later, I put it on his AKC registration papers and sent them in. Willy it was.

That night, he kept trying to get out of the cardboard box I put him in. Eventually, I put him next to my side of the bed on the floor. I didn't sleep much that night and I had plans to go hunting. I'd be taking Willy of course.

The next morning, my wife announced she was coming with us. I was amazed. She'd never gone duck hunting with me before. She wanted to bring the camera and get some pictures of me with my new dog. OK. I could already see though, he was going to be our dog.

It was beautiful fall day. The trees were mostly bare of leaves, but it was a clear bluebird day. Absolutely gorgeous. A day for people though, not for ducks. I didn't mind one bit because I was out there with my new dog and my wife was along snapping pictures. We really did have a great time. We didn't get any ducks though.

At home, I started teaching Willy right away. His name, to go outside. We played every night and every morning. He was growing fast. My wife says he always looked bigger in the morning than he did the night before.

Willy was smart too, just as I had known he was. He learned his name, to come, and to sit down very quickly. And I took him hunting twice every weekend until duck and goose season closed. He didn't do anything except come along, of course, with the exception of the Saturday after that first day when both my wife and Willy came along for the first time.

Photo: Lots of Labs by Ingo Di Bella at Flickr.com