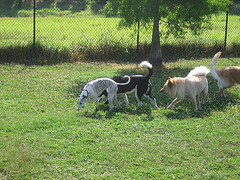 Saturdays usually meant a trip to the dog park. We'd load the dogs up into the back of the pickup and make the twenty-minute drive to a large preserve where training dogs was allowed. Few people used it for formally training their best friends, but everyone used it for exercising, socializing and informally teaching their dogs. As long as you kept your dogs under control, no one complained. It was a good place and it was not unusual to find twenty to thirty people with as many as sixty or seventy dogs on a Saturday or Sunday afternoon.

The parking lot adjoined a large, grassy area that was about five acres in size. This was surrounded by natural prairie, bogs, forests and marshes that totaled more than 1300 acres. Several streams criss-crossed the preserve and there were miles of trails to walk on.

Dogs will be dogs of course, and on occasion there were minor disagreements that were quickly ended by owners. No furry people ever got hurt and the worst wounding was the momentary bruising of an ego or the disdain toward an over-zealous male by a not-quite-in-season female. 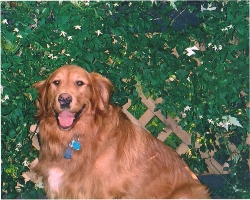 In that vein, JD was always a ladies dog first, and a retriever second. He had his favorites too. My brother's dog Maddie was first on his list and for his entire life, JD would try to win her favor, only to be disappointed when she literally put her nose in the air and ignored him.

Once on the dock at the cabin, Maddie stood at the end, looking out over the water. JD stood next to her, tail switching stiffly back and forth with the precision of a metronome. He begged her, he pleaded with her. He put his paws out, bowed low with rump high in the air and said, "Aroooo. Aroooo. Arooooroooro."

Maddie couldn't have cared less. Or maybe she knew about the dog park.

JD had lots of lady friends at the dog park. There was the German (shepherd) girl with the big paws and happy tail that liked him a lot. Another beauty from Labrador with cream colored fur and dark eyes would pretend not to notice him, but if he looked away at another girl she would nudge him with her nose to get his attention back.

And then there was Fluffy Girl. Fluffy Girl had pure white fur, blue eyes and looked to be a mix of husky and poodle. Lineage didn't matter to JD however, and Fluffy girl caught his eye and he hers. They would run and play and chase until it was time for one or the other to go home.

One day Mr. Tough was at the dog park. He was a big, powerful dog that weighed in at about 140 pounds and if he bumped you, he just might knock you over. Mr. Tough did not like other dogs and if one came too close, he would bare his teeth and growl. Mr. Tough's owner thought this was humorous and would chuckle. Most of the other dog parents didn't like Mr. Tough's owner, or Mr. Tough, and we would try to stay away from both. 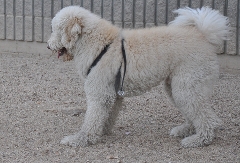 One day Fluffy Girl and JD were having fun and there were about twenty other dogs at the dog park, including Willy, JD's lifelong pal, best buddy, and sharer of the coveted water bucket. Fluffy Girl stopped to have a drink from the community pail and then trotted away. JD was taking a long drink when there was a snarling commotion and then a scream.

I was talking to another guy and turned to look. Apparently, Fluffy Girl wandered too close to Mr. Tough and he took offense to it. When Fluffy Girl didn't move away fast enough, he attacked. By the time I turned to look, Fluffy Girl was on her back and Mr. Tough had her by the throat. He was trying to get a better grip to do serious damage. Someone else was stopping Fluffy Girl's owner because if Mr. Tough had turned on her, she would get hurt bad. Mr. Tough's owner was watching with amusement.

I took hesitant step towards the dogs. I really did not want to get into the middle of that fight, but something had to be done. As it turned out, it was a wasted step.

In a blur of golden furry glory, JD came running into my vision at full speed, tail straight out behind him and the long tail fur streaming in the wind. Just feet away from the trapped Fluffy Girl, he lowered his head and charged full bore into Mr. Tough's flank and bowled him over three times. Then it was JD who was on top and it was Mr. Tough on the bottom with his throat in a toothy vice.

Suddenly, Mr. Tough's owner didn't think it was amusing anymore. Now he was screaming at me to save his dog from mine. I let JD have his satisfaction for a moment because he was not trying to kill Mr. Tough, only force him to submit, which he was in a big way. I pulled JD off Mr. Tough and he fought me every inch of the way. He did not want to stop and I don't blame him―you don't quit when you're winning. Mr. Tough slunk off and hid behind his owners legs, which looked pretty ridiculous.

It was revealed in the moments after the incident that Fluffy Girl was not the first dog Mr. Tough had openly attacked, and a different golden retriever had gone to the emergency vet just the week before to be sewn up. Mr. Tough threatened to sue me, and I found myself surrounded by other dog owners who gave me their names and phone numbers in case I needed witnesses. Needless to say, I never heard a word from Mr. Tough or his owner. 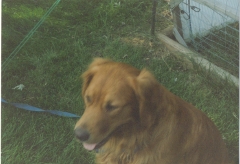 JD was a hero that day. He saved Fluffy Girl from serious harm or worse by a dog more than twice her size who outweighed him by thirty pounds. As it was, she had only one small tear in her skin that didn't require much attention. True to form, it was JD to the Rescue that day and we've always been proud of him for that.

Unfortunately, it was also the beginning of the end for the dog-friendly preserve. Shortly thereafter, the "Keep Your Dog Leashed" signs went up and they began enforcing it. Now, if you want to go to a dog park, you go show rabies tags, vet certifications and pay a good sum for access to a small, enclosed area without trees, grass, trails or a community drinking bucket.

Some people just are not happy until they ruin things for everyone else, including themselves. 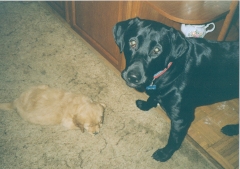