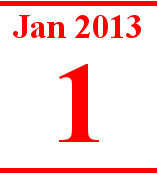 We had a moment of discussion, and whatever I was trying to distract her from talking about was forgotten and my concentration irrevocably broken, so I called. They had four, one male that was already spoken for and three females that were not yet claimed. The puppies were just 41 days old, a day under six weeks. Not only that, the family owned both the mother and father, and we'd get to see and meet both.

In my mind, that is as close to a perfect, ideal situation as you can find.

Within an hour, we were in the car for a three hour road trip to Southwestern Wisconsin. The day was bright and held a lot of promise, just like New Years Day should, with a deep azure blue sky bereft of clouds. It was perfect for a drive through the snow-covered rolling hills dotted with farms and Small-Town America. 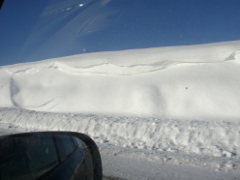 Our excitement mounted with every minute. Although we snapped a few photos at 70 miles per hour of various snow formations and cliffs carved out of sandstone, those were merely distractions. We were on our way to bring a new puppy into our family, and neither one of us could wait.

There's always that excited anticipation. You just know from your conversation on the phone with the folks you're on your way to meet that this is the right litter, the right time, and the right puppy is going to be there. The closer you get, the more you anticipate and the more you can't wait.

We turned off the freeway and followed a state road for a quite a ways through several small towns that you could miss if you blinked more than twice, then onto a county road and down an impossibly steep hill for a short jog over to another county road. From there, it was just a mile and a half to our destination.

The family opened their door and invited us in. The kids seemed kind of quiet and the litter had been moved out of their usual home and into the living room so they could say goodbye. I felt a little bad, but puppies need homes and we give them a great home and make them part of our family. There's plenty of good food, a warm place to sleep, and of course, puppy treats. 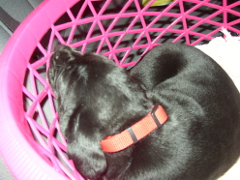 We met the parent dogs first. Good dogs. The mother is a yellow lab and the father a chocolate. Well behaved, well groomed, and looking fit. Mom was a little tired and harried, but that is to be expected. Raising puppies is hard work after all.

Then the puppies. Three females and at one point, I had two in my arms and Marg was holding one. I looked at her and grinned. "So hon, all three?"

Marg reminded me that I had put my foot down and stated we were only getting one. I really did say that, and I meant it. But they were all so darn cute it was hard not to say we wanted them all. Realistically though, it is enough work to teach and raise one puppy, let alone three. Three just wasn't gonna happen.

Two of the girls were little bigger than the third and they were born that way. Some people call them runts, but I've learned from litters my own dogs had, this is no measure of what is to come. She certainly wasn't a runt anymore, had plenty of spunk and seemed a bit feisty. Probably from making sure her brother and sisters didn't get all the food.

We decided on the little girl. She was for us and we all three knew it. The adventure which started four hours earlier was just getting rolling. So, a few pictures with cell phones, a couple of handshakes and signed papers, and we were on our way.

It has been five days now, and Velvet Lady is learning her name. She figured out that Mama is a soft touch and some soulful eyes will get her a treat. She sleeps by my feet during the day and often wakes up just to bite my toe and say, "Hey. Time to Play!"

Before we play, it's outside to sniff and walk and bounce and learn that is where good puppies go, and not on the carpet. Then it's time for toys and treats and little puppy lessons. Not much yet, she's just over six weeks old at the time of this post. She is already a part of our family and is learning to make her own place. It is already apparent she is so smart.

Velvet Lady--her fur is soft as velvet, black as coal, and almost iridescent the way it shines. She has the pug nose and blocky head all lab puppies have, and her eyes are shiny and wise. She has a lot to learn and so do I, and together, we're going to discover lots of things about each other. The summer will bring trips to the lakes and come autumn we'll hike in the fall colors.

All Photos by Marg