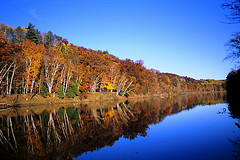 I think we all had places we never told our parents about. Places we might have gone, or wanted to go to, but never mentioned because we knew, without even thinking about it, that our parents would just automatically overrule any idea of going there. The answer, if one dared to ask about going, could only be no.

By not asking, and not telling, you could always find a way to justify going to those places if you were found out. "We went to the park, and it was close by." or "You never said I couldn't go there." and even "Didn't you go there when you were kid?"


The last of those justifications is the most powerful. It says, "Well you did it so why wouldn't I do it?" And really, any of those places, though possibly dangerous in some way, represent rights of passage or teenage fun and many other things. Those were the places we asserted our growing maturity and the ability to make decisions―whether or not they right or wrong―which is another part of growing up.

Some of my constant readers probably wonder how I survived this long after reading some of the things I've done. Not all of them were life threatening, but some were. Sometimes I was foolish enough to do something truly dumb, but I always made it. Sometimes I made it by using skill or intelligence. A few times I just got lucky. Today, I tell not so much about a single adventure, but part of the adventure of growing up in Small Town America and how it was different from today.

The Bay was of those places you didn't talk about. You never mentioned it in the presence of adults, though many of our parents had probably been there a time or two. It had been around a long time. Going to The Bay was not easy and there was an element of danger involved in getting there, and getting back. The place itself was not the safest place to have fun, but older teens had been going there since before I was born.

More than likely, you didn't go unless you had a car or could ride with someone who had a car, unless you were willing to ride a bike seven miles along a curvy, narrow highway with scant shoulder where cars often drove considerably faster than 65 miles per hour. And then you had only arrived at the dangerous part.

The park was situated along a river bordering Michigan and Wisconsin. The river was notorious for dangerous currents, especially in the spring and in the fall. During the summer months it was usually lazy, but it could change in moments. Hard rain far upstream could introduce twisting whirlpools and swiftly moving and rising water in the space of a few minutes. Traveling the river was the danger, because you had to swim about a half mile across the river and downstream to reach The Bay.

The Bay wasn't really a bay at all. It was an island at times of high water, and low peninsula at times of low water. The place we called The Bay was between the island and the shore. The upstream part of The Bay was about twenty-five feet deep and grew progressively shallower as it went downstream. The Swim back to the park in high water against the swift current was a long, tiring swim.

I think back and I remember a time when someone brought someone else who was younger and hadn't had a lot of swimming experience, and we said no. You can't come with us. The kid was insulted and hurt, and so was the guy who brought him along. But we said no, and we didn't make the swim until they left. 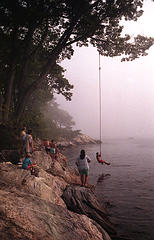 How many almost-adult teens would say no today? How many would even realize the danger in bringing someone like that along. Younger brothers and sisters often begged us for a chance to come along, but we always said no. That was one place you didn't play games or take any more chances than you were already taking. I remember...

"And then you'll never get to go, because no one will ever take you or show you how to get there."

I remember that conversation all too well. It should have been a warning to me, but I was too busy thinking about the girl and the friends I was going to The Bay with that afternoon. I would not find out for many years that my inattention to that detail nearly spelled disaster for Little Brother.

The Bay was fun. You could climb the ladders up the white pine to the platform―three skinny 2-by-4s nailed across thick branches about sixty feet off the ground. There were three, 20-foot sections of wooden ladder, each nailed to the tree, to make ascending less difficult. And if you've never climbed sixty feet of ladder, be assured that it is not easy. Once you were up there, you had three ways of getting back down―excluding a fall of course.

The first way down was a thing they now call a zip line. A one-inch-thick cable ran at about thirty degrees from just above the platform down across The Bay to another white pine on the opposite shore where it was fastened about eight feet off the ground. You used a smaller rope to pull up the handles, a triangular piece of welded steel which traveled on the cable in a captured pulley (the pulley could not jump the cable, it was permanently enclosed). You'd grab the handles with both hands and ride it down at unimaginable speeds to let go in the middle of The Bay and plunge down into twenty feet of water, then swim frantically for the circle of light that was the surface far above you.

Not letting go meant a face plant in the middle of the tree. 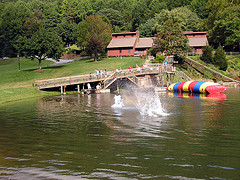 Yeah, going to The Bay and having fun also meant having some guts. Stepping off the platform was hard enough the first time, and so was letting go of the handles at the right time. If you didn't let go, you'd bug splat on the trunk of the tree, or land in shallow water if you waited too long to let go―nearly as dangerous as hitting the tree.

Descent method number two was just as much fun, and probably more dangerous. Fastened to the top of the tree opposite the platform was a rope as thick as my forearm, which is pretty thick. You could pull the rope up, grab onto a knot, step off the platform and watch the water rush up to meet you. Let go too soon and you fell into shallower water and you legs would sink into the slimy muck a foot or two. Wait too long and...well we've already mentioned bug splat.

No one that I know of ever used method number three to descend. If you did that, you were chicken and no one ever wanted to be called chicken. So, no one that I knew of ever climbed back down the ladder.

I went to The Bay a few times when I was sixteen and took my girl with me. I went a lot more when I was seventeen and didn't take my new girl, because she couldn't swim that well. After I turned eighteen, I only went once. My friends were headed for college, I had a job and was deciding what I was going to do with my life, and wondering about marrying that girl (I didn't by the way).

Because of the thick brush and trees on the small island and the mucky bottom, there wasn't much else to do but swim, climb the ladders and scream as you took your wild plunge into the water. An old worn out raft would hold four to six of us at a time, more than that and it would tip over or just sink. A few hours of non-stop swimming, climbing and riding would wear you out. And when you were all worn out, you still had to swim back upstream against the current and across the river.

I knew of other places like The Bay that I never told my parents about. Places like Suicide Hill where you could satisfy your Need For Speed, or The Quarry where you overcame your fear of heights and dove forty feet off a cliff into icy green water that was more than 100 feet deep. Yeah, those were all places you didn't tell your parents about. 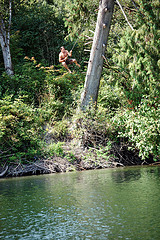 Little brother told me, not very long ago, that he and his best friend went to The Bay once before they could drive and before they were ready. For some reason, they were near the park and decided to go. He told me the swim there wasn't so bad, but getting back got iffy about half-way across the river. They were alone and there was no one to help them. Apparently, The Bay was a place you didn't tell older siblings about, let alone your parents, until you were much older.

You see, there was an element of safety in the adventure that was The Bay and growing up in Small Town America and it was never really spoken of. It just one of those unspoken rules created out of logic.

Someone who was strong enough to swim the river, was also strong enough to hang onto the rope or the handle bars and swing or ride a couple of hundred feet at dizzying speed. Later, they'd have enough strength to swim back, even though they were tired. Not everyone could go to The Bay, and not everyone did. Life is not always fair, but sometimes that makes it safer.

The Bay was a place you didn't go alone and not just because what fun would that be? But in that, there was also safety. Safety in numbers. If someone got tired swimming back, two or three others in the group could help. I never saw that happen, but it was true. We always stuck together, even if there were kids along you didn't like much. Back then it was just another part of life in Small Town America. Even two kids who didn't like each other, two kids who were likely to have a fight in some out of the way place, those kids would help each other if one needed help.

Where did you grow up? Where were the hidden places of your youth that you never told your parents about? What adventures did you have, that even today, you're not entirely comfortable sharing with your parents?