Some readers have been asking for an update on Velvet Lady, who joined our family on January first. Between amazing growth spurts and eating enough to feed a small army, Velvet has also been learning at a phenomenal rate. Learning new things about the world around her, about becoming member of a family, and how to be a smart and resourceful dog. There is so much learning at this point that you try to incorporate some sort of learning into everything. One of the most important things to learn for any puppy, in any situation, is who leads the pack and where they fit into the pack hierarchy.

One of my worries when we brought Velvet home was how young she was. At just 40 days, she was a full nine days younger than most experts will tell you is the ideal date to take a puppy from its litter. Experts will tell you how important that last week with the litter is. During that time, a puppy learns that it is a dog. A member of a pack, and the pack is its family.

Velvet didn't get that time. I thought about paying for her and going back to get her a week later, but I didn't want to do that. Velvet was healthy, weaned, and holding her own in the litter, and she was also the most active of the litter, at least when we saw her. Even though she was healthy, she did not have the puppy belly the other pups in the litter had. My opinion was that over the next week, her larger litter mates were going to continue to get the lion's share of the food, and Velvet would lose out. So I decided we would bring her home. 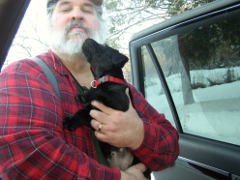 There have been more than a few moments when I wondered if that was a good decision.

My fears have been allayed because now Velvet is learning and loving and fitting in more and more each day. She still has her moments, but I am so glad we have her. It required great patience at times.

It helps that my hands and arms don't look like someone took a wire brush to them anymore.

Labradors Love to Chase and Retrieve

We play fetch in the living room with her soft toys. One of her favorites is a toy Marg named Blueberry. Blueberry is a half-roll of toilet paper tied up in a blue, terrycloth rag. Velvet loves to fetch it and will bring it back and put it in my hand. She still hangs on for a moment or a minute, but that is okay. She is learning that if she gives it to me, I throw it again for her to go after. It is important not to wrestle it out of her mouth, for that is a game you don't want to play.

That game will turn into a different game called "keep away". Keep away is bad because if she has something you don't want her to have, you'll have trouble getting it away from her.

I've been teaching her to catch for about two weeks and she has figured it out. She'll run across the living room and wait. I'll throw and she'll catch it--even the line drives--before it hits the ground. Then it's a mad dash back to the couch, a leap and put it in my hand to do it again.

Velvet knows the name of each of her toys and will find and retrieve the one you specify. Not bad for five months. All credit for this learning feat goes to Marg. 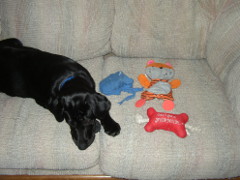 A few weeks ago she had her first introduction to water and wasn't the least bit intimidated. She ran right into the ditch full of icy runoff water and splashed around for a moment. I wasn't very thrilled that she got all wet on a bathroom break in the middle of a road trip, but I was happy to see her go into the water.

In another month I'll take her swimming and see how that goes, but I'm sure it will go fine. I can't wait to get her chasing dummies and sticks and swimming. Thats all part of a black lab's definition of fun and Velvet shows every indication of loving it.

Puppies are the very definition of exuberant energy. When she gets her spring wound up to a certain point, that energy has to go somewhere. She turns it into a mad race around the house that begins in the living room, into the dining room and around the table, through the kitchen and into the hallway; down to the end of the hall where she does an about face at full speed--paws and legs scrambling for purchase as she executes a perfect skid turn about and come racing back, veers right and leaps onto the couch, bounces off the back and heads for the dining room again.

This goes on at full speed for three, four, maybe even five circuits.

We call it psycho puppy.

Sometimes, psycho puppy is a warning that a puppy accident is about to happen if you don't take immediate and decisive action. We direct her down the stairs get the leash on her and outside.

Too often, this turns out to be a false alarm. However, often enough we're glad we went so we don't take any chances.

Speaking of puppy accidents, these have become few and far between. Rare. Even better, she has learned that accidents are not good things and if by chance she has been distracted too long, she will run down to the landing and if we don't make it, well, at least it's not on the living room carpet.

There have been a couple of incidental accidental happenings that have brought her sanity into question. Or is my sanity that requires questioning? Doubtful since no one questions my insanity.

The day I had her outside for 30 minutes and she wasn't interested in anything except coming back inside, and then oops! Not so bad, except it was twice that day. The second time I scolded her mildly. The next day, she showed signs of another misjudgment and I was hollering "Outside! Outside! Outside!"

We made it outside. Happy Mike. Happy Mama. Happy-Tail Puppy. 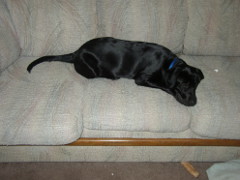 The robins and other spring birds have arrived and are busy hunting up worms and bugs in the grass. I keep a bird friendly yard and so we attract lots of birds. Velvet is fascinated. She tried to run after one and it flew away. She looked at me with her sad face and I was sympathetic, but saw an opportunity.

The next bird that came, I held her leash tight and told her "sit." At first, she wanted to chase, but I was firm. "Sit," I said, and tugged the leash. Velvet sat. Muscles taught and quivering. Nose working overtime.

The robin hopped closer and closer. Tilted its head, listening. Then the peck and the battle between night-crawler and robin was on. The robin won and got a tasty protein dinner.

All from six feet away.

It was too much for a puppy. She jumped and the robin flew away. You could almost see her jaw drop.

Velvet sat down again, disappointed, but the lesson was learned. Today we were out in the yard again on the long lead. Velvet was investigating the world when two robins hopped into view that she didn't see. I pulled her back with a few tugs, got her turned around and sitting. With my arm alongside her body, hand flat thumb side up, I showed her the birds.

Ears cocked. Nose nosing. Eyes watching. Every muscle taught and ready. But she didn't break. She stayed right there and watched.

So overall, I'm really happy with Velvet. Yesterday, we took a day trip to see my dad who is recovering from open-heart surgery in a rehab center. Car rides have not been one of her favorite activities, but yesterday she was very good in the car and didn't give us any trouble at all. It was not very fun for her; she spent most of the day cooped up in her crate in the car. But it was a good day for all of us. She had walks in new places, explored some new things, and got lots of treats like french fries and puppy snacks. Her first walk at a wayside dog walk area seemed like overload. She couldn't sniff in everyplace at once, but she tried.